This has been sent to me from the PEERS network.


"Mankind is in the midst of the most profound event in history – actual contact with intelligent life from other planets. For nearly 50 years, officials have been documenting routine alien encounters here on earth, and thousands of people have seen or experienced this alien presence. Yet many others still refuse to acknowledge the obvious evidence all around them. From beyond the boundaries of our perceptions, intelligent beings are beckoning mankind to join the galactic community."
~~   Walt Disney Television special: UFO video documentary titled Alien Encounters 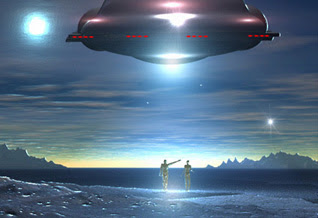 Dear friends,
In March 1995, Walt Disney Television aired a most intriguing one-hour television special on UFOs titled Alien Encounters from New Tomorrowland. This highly unusual UFO video special presents UFOs and alien visitation to our planet as a matter of fact. Though the film's existence is acknowledged by the respected website of the Internet Movie Database, you will not find it available anywhere for purchase.
Those who tracked this incredible production state that it was shown only once, and with no advance notice on stations in only five US cities. Thanks to a viewer who was able to roll the VCR and capture it, we have a record of the startling statements it contained. Watch this fascinating 45-minute program at the link below.
www.personalgrowthcourses.net/video/ufos_disney_alien_encounters_video
At first glance, this unique Disney TV special appears to be an elaborate promotion of a scary New Tomorrowland ride on alien encounters which was about to open at Disney World. But on closer inspection, it is much more. The entire program, which opens with a short segment by Disney CEO Michael Eisner, doesn't even question the existence of UFOs and a major UFO cover-up. At times it has a tone of ridicule towards those who still deny the existence of UFOs.
Considering the very limited showing and audience, and the highly unusual stance on UFOs taken, many suspect that this program was a probe to measure public reaction to news of the reality of visitation and interaction with various forms of non-human intelligent life on Earth. The 10-minute section on alien abductions seems particularly designed to scare viewers. For information that the abduction phenomenon may not be as scary as presented in this film, read about the thought-provoking documentary Touched, based on the careful research of Harvard Professor John Mack at this link. Or watch it online here.
Besides watching this most amazing Disney UFO video at the above link, select excerpts from the intriguing program are also available in a partial transcript below. And at the bottom of this message you can find a box with excellent suggestions on what you can do to further educate yourself and others on this intriguing topic, and how to make a difference by spreading the word.
With best wishes for a transformed world,
Fred Burks for PEERS and WantToKnow.info
Former White House interpreter and whistleblower
Note: Don't miss our excellent UFO Information Center which is chock full of reliable, verifiable information on UFOs, ETs, and a major cover-up of the phenomenon.


UFO Video Special Excerpts: Alien Encounters From New Tomorrowland
Key excerpts from a transcript of the UFO video special Alien Encounters From New Tomorrowland. All quotes were spoken by host/narrator Robert Urich unless otherwise noted. Remember, Disney CEO Michael Eisner and narrator Robert Urich delivered these quotes with straight, matter-of-fact, totally serious cadence and inflection, as you can see in the video we've posted at the link above.

Note: For those interested in more on this UFO video, see an in-depth article on Disney's significant role in shaping public opinion on UFOs and much more, see this link.

What you can do: