These examples below are obtained from the book The Holographic Universe by Michael Talbot.

In the 1930,s J.B. and Louis Rhine discovered that volunteers could guess what cards would be drawn randomly from the deck with success rate that was better than chance by odds of three million to one.

In the 1970s Helmut Schmidt, a physicist at Boeing Aircraft in Seattle, conducted over sixty thousands trials and has obtained results that were one billion to one against chance in predicting random subatomic events.

Montague Ullman with psychologist Stanley Krippner and researcher Charles Honorton at the Dream Laboratory at Maimonides Medical Center have obtained results which could support notion that dreams can be used to determine feature.

Volunteers were asked to create dreams in which they would discover a random picture selected next day.  The best subject could score 5 hits out of 8.

Their experiments were duplicated by numerous laboratories around the world. In 334 such trials Jahn and Dunne of facility in Princeton were able to come up with accurate precognition in about 62 percent of cases.

Both Puthoff and Targ believe that non-local quantum interconnectedness plays a role in precognition. That mind is able to access some kind of "holographic soup" in which all points are interconnected in time and space.

Studies also show that precognitive visions tend to be of tragedies with premonitions of unhappy events outnumbering happy ones by a ratio of four to one with 60 to 68 percent occurring in dreaming.

The question is if by knowing the future, can we avoid it.

There are nineteen documented cases of people who had glimpses of sinking of the Titanic and some who paid attention to their feelings survived but those who didn't drowned.

Is it possible that future of those who survived included the fact that they would be given future knowledge and avoid the accident? Or the prior knowledge allowed them to change the direction of their life's path?

Researcher Loye believes that Universe consists of various holograms. When we have premonition of something to happen and we decided to avoid it, we simply join different hologram, which has been already firmly set. So in the end we are not changing the future, but just changing the hologram, similar to going to different theater and watching different play or movie.

This is also explained by other researchers and writers as parallel universes, where we jump between those universes when we change our paths. During dreams we can at will go between those universes and visit totally unrelated scenes in an instant. In addition our believe or expectation can change the direction of the dream in an blink of an eye. E.g if we become fearful of something, this instantly becomes reality of our dream.

Others believe that future is in constant process of crystallizing, but being fluid. Hawaiian kahunas believe that great world events are crystallizing furthest in advance as there are more minds believing in their fulfillment, thus the energy contributed to crystallize is much greater than the one which only matters for the individual life.

If we assume that our reality is simply unlimited number of holograms or parallel universes we could imagine it as a spider web, where we are moving from the center towards the outer parts of it and instead of going through one thread, we are simply jumping from one to another when we make singinficant change in our perception and create zig-zag line behind us which we could call our life's path.

Based on this assumption our life's path still will have its end as it had its beginning, but it could be more original or unpredictable if we had listened to our inner voice and have made choices which would allow us to avoid some hard lessons or painful experiences.

It is called phenomenon because it doesn't fit any of the scientific explanations and defies all current physical laws and theories including Einstein relativity theory that nothing can be faster than light.

If you investigate that phenomenon you will learn that two subatomic particles positions are synchronized instantly at the distance when one of them is repositioned.

Posted by Bogdan Fiedur at 07:20 No comments: 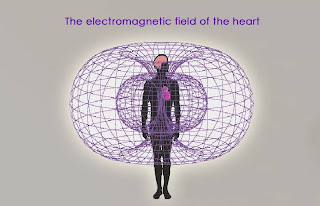 Posted by Bogdan Fiedur at 21:51 No comments:

In continuation from part 1

Below observations are summary from the book The Holographic Universe by Michael Talbot from the chapter Seeing Holographically.

Generally it is believed that human aura is an energy filed of higher vibration than normal matter energy. This is believed in Hindu tradition as well as it has been confirmed by those scientist who researched the human aura and measured it in the lab environment. In fact ancient Hindu literature describes matter as consisting of atoms (anu) and energy of the human field  as (paramanu) meaning "beyond the atom".  The physicist Bohm, who believes that universe has holographic nature, also believes that at the sub-quantum level there are many subtle energies still unknown to science.

Some psychics report that they can see three-dimensional images, virtual holograms which can be linked to person's preoccupation with daily problems. Some psychics can see movies in person's aura and can virtually rewind their experiences in the past or even go forward into the future. This could be discounted as person's imagination, but specific examples point to the facts that psychic was able to describe details of decoration inside the house which he had no experience of visiting or knowing  beforehand. The psychic could tell how many plants were in the house, how many leaves are on each plant or how many bricks are in the wall.  The psychic with the name Dryer, says that when she sees such a movie, she is becoming part of it and finds herself in that specific place or room. She feels like she watches 3 dimensional movie while being in the center of it and not taking part in it.

"The body is a kind of microcosms, a universe unto itself reflecting all of the different factors that a person is dealing with and trying to integrate"

A psychiatrist named Karagulla discovered during her research several people who had the ability to see through a person like with the X-ray vision. One such individual could see for example distortion of an aura and after closer examination she could see that there was intestinal blockage near the observed person spleen.

Even in spite the fact that woman didn't have any symptoms, after actual X-rays were taken,  doctor could confirm that the examined person had the exact condition.

In another case the same clairvoyant with the name Diane, observed another patient who was hospitalized. Without being explained what was the patient condition, Diane determined that patient was missing pituitary gland which was affecting her other organs.

The medical report cold confirm that patient's pituitary gland has been previously removed.

Detroit researcher and a doctor Richard Gerber believes that it is the energy field that molds the body and not the other way around.

"The etheric body is a holographic energy template that guides the growth and development of the physical body." says Gerber.

Physicist Tiller agrees. "The thoughts that one creates generate patterns at the mind level of nature. So we see the illness, in fact eventually becomes manifest from the altered mind patterns through the rachet effect -first, to effects a the etheric level and then, ultimately, at the physical level  where we see it openly as the disease."


Tiller believes that if doctor where able to treat energy filed the illness would no re-occur. Currently medicine only addresses physical level which is only manifestation of the already distorted/blocked energy field.

Posted by Bogdan Fiedur at 21:21 No comments: