Traces of technical civilization thousands of years ago

Science and history are attempting to convince us that we have started out as a civilization  in caves over 10,000 - 40,000 years ago and currently we are at the highest level of human evolution.  Some of the ancient artifacts and even writings point to totally different conclusions. We are finding more and more unexplained archeological proofs which after being examined and applied through alternate way of thinking, can convince us that possibly more than 10,000 years ago the technological advances on earth were even higher than those today. In my previous articles I was showing examples of that.

Today I would like to point to some ancient writings and present the possibility of nuclear war happening in the past on this planet possibly caused by ancient humans or visitors from other planets. Let's start with the Hindu ancient texts using


"Gurkha, flying a swift and powerful vimana (fast aircraft) hurled a single projectile (rocket) charged with the power of the Universe (nuclear device). An incandescent column of smoke and flame, as bright as ten thousand suns, rose with all its splendor. It was an unknown weapon, an iron thunderbolt, a gigantic messenger of death, which reduced to ashes the entire race of the Vrishnis and the Andhakas. The corpses were so burned as to be unrecognizable. Hair and nails fell out; Pottery broke without apparent cause, and the birds turned white. ...After a few hours all foodstuffs were infected... ...to escape from this fire the soldiers threw themselves in streams to wash themselves and their equipment."

….The Vayu (the presiding deity of that mighty weapon) bore away crowds of Samsaptakas with steeds and elephants and cars and weapons, as if these were dry leaves of trees…

Borne away by the wind O King, they looked highly beautiful like flying birds…flying away from trees….”


And again, in the Naryamastra Mokshana Parva (Drona Parva), reference is made to the “Agneya Weapon” incapable of being resisted by the very gods.

Meteors flashed down from the firmament…A thick gloom suddenly shrouded the host. All points of the compass were enveloped by that darkness…Inauspicious winds began to blow…the sun seemed to turn round, the universe, scorched with heat, seemed to be in a fever. The elephants and other creatures of the land, scorched by the energy of that weapon, ran in flight….The very waters being heated, the creatures residing in that element began to burn..hostile warriors fell down like trees burnt down in a raging fire- huge elephants burnt by that weapon, fell down on the earth…uttering fierce cries …others (s) scorched by the fire ran hither and thither, as in the midst of a forest conflagration, the steeds…and the cars (chariots) also burnt by the energy of that weapon looked…like the tops of trees burnt in a forest fire…” …winds dry and strong and showering gravel blew from every side…Birds began to wheel making circles…The horizon on every side seemed to be covered with fog. Meteors – showering blazing coals fell on the earth from the sky…The Sun’ disk…seemed to be always covered with dust…Fierce circles of light were seen every day around both the sun and the moon…A little while after the Kuru king, Yudhishshira heard of the wholesale carnage of the Vrishnis in consequence of the iron bolt…(Mausala Parva). “….O illustrious one – let the threefold universe – the future, the Past and the Present exist. From thy wrath a substance like fire has sprung into existence; even now blistering hills, trees and rivers and all kinds of herbs and grass in the mobile and immobile universe is being reduced to ashes! (Abhimanyu Badha Parva).


Four hundred kilometers north-east of Mumbai, there is another unusual evidence, -a huge crater Lonar. It is a round bowl with evolutionary age of 50,000 years , a diameter of 2154 meters, the pressure at the time of the alleged shock meteor reached 600 000 atmospheres which caused enormous temperatures that melted rock. At the same time there isn't anything that would indicate that the crater was the result of a meteorite impact. Pat Frank, an American expert on space programs, developed a theory which states that this type of craters can be [also in the absence of any other explanation] powerful nuclear explosions.


If it is true that nuclear explosions were happening in ancient times, we can also ask questions like what happened to such civilization as Sumerians.

A leading expert on Sumerian civilization Samuel Kramer translated some of the Sumerian tablets as follows:


On the land [Sumer] fell a calamity, one unknown to man;
one that had never been seen before,
one which could not be withstood.
A great storm from heaven...
A land-annihilating storm...
An evil wind, like a rushing torrent...
A battling storm joined by a scorching heat...
By day it deprived the land of the bright sun, in the evening the stars did not shine...
The people, terrified, could hardly breathe;
the evil wind clutched them, does not grant them another day...
Mouths were drenched with blood, heads wallowed in blood...
The face was made pale by the Evil Wind.
It caused cities to be desolated, houses to become desolate;
stalls to become desolate, the sheepfolds to be emptied...

Sumer’s rivers it made flow with water that is bitter;
its cultivated fields grow weeds, its pastures grow withering plants.


Another mystery is the great glass sheets of the Sahara. When the first test atomic bomb exploded in New Mexico, the desert sand turned green there in the molten glaze. Similar panes of glass were found on areas of the ancient desert located in different regions of the world. One of the greatest mysteries of ancient Egypt are the big glass panels stretching across the Sahara Desert for hundreds of kilometers. Those mysterious sheets of glass where found in 1932. Some of the pieces of glass found there, were weighing more than 26 kg. It was the purest natural glass ever found - made up of 98 percent of silica.
More on this here... by  David Hatcher Childress


When the city of Mohenjo Daro was excavated in the last century archaeologists found skeletons lying in the streets, some holding hands, as if caught by some great catastrophe. The skeletons are among the most radioactive comparable with those of Hiroshima and Nagasaki. There are many ancient cities all over the world in which stones and bricks were literally melted together. They can be found in India Ireland, Scotland France and Turkey. It is difficult to explain such melting of ceramic materials other than as a result of the atomic bomb. Moreover, in the streets of Mohenjo Daro there were many black pieces of glass found, which later were determined to be clay pots melted under high heat.

Another mystery which totally baffles current science is the Sun-Star of Peru.
Full article here.

Nestled in the mysterious reaches of the Peruvian desert in the Palpa Mountains is one of the most precise geometric configurations known to man:  The Sun-Star, and its “satellite” – the Sun-Cross.  This famed Geoglyph has for centuries remained an obscure earthly reflection of ancient calibration – an astronomical wonderment depicting something far and beyond the immediate reach of human understanding … if the Great Pyramid of Giza, Egypt, is to metrologists the Seventh Wonder of the World (still standing) in the Northern Hemisphere – then the Sun-Star of Peru is the “Eighth” World Wonder whose measurements may claim the Southern Hemisphere. 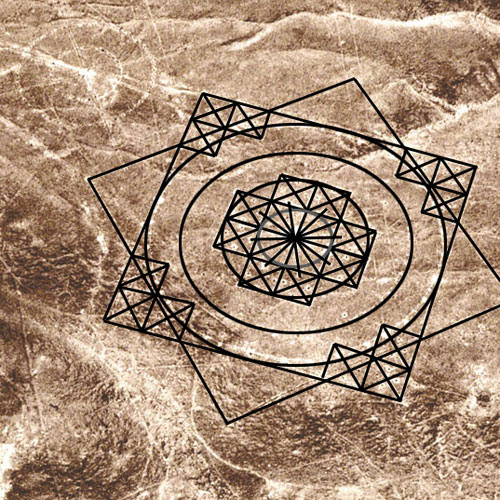